A blog about cooking and food, and how to make it taste good and be healthy. The dishes are almost all gluten/dairy free, and many are vegetarian. The focus is on techniques and ingredients over recipes - this is about everyday cooking, and that means making it work with whats on hand! 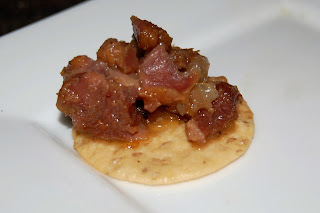 I was encouraged by my first experiment with pig cheeks, and decided to try something else with them. This time I tried slow cooking the cheeks in the oven, going for a chopped meat feel.


The day before cooking, I placed the cheeks in a brine of water, sugar, and salt, to let them soak overnight. I kind of eyeballed the amounts, in between 1/2 and 1 cup each of salt and sugar for 2 quarts of water. This both tenderizes the meat and infuses it with the sugar and salt, instead of just coating the surface.

When I was ready to cook, the first thing I did was sear the cheeks, browning them on both sides. I then transferred them to a casserole dish with a diced apple and onion, apple cider and cider vinegar. This went into the oven at 300 degrees for 2 hours, uncovered.

I pulled the pork out onto the cutting board, and poured the juices into a pan to reduce. 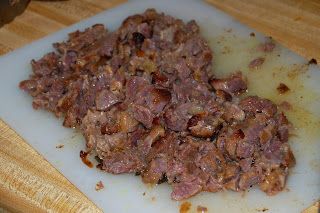 While the sauce was simmering, I chopped the pork, sampling little bits. They were a delicious amount of salty and sweet from the brine, and had a great texture that was simultaneously tender, but still with some meaty chew. Added to the reduced sauce, the apple flavors complemented the meat perfectly. I didn't have any bread, so I ate it with crackers, but it made amazing sandwiches later!

Cooking is easy. Nature has done most of the work for you, and you just have to give it a little extra push.
Cooking basically is combining some good stuff and adding heat. Sometimes you don't even need the heat.
If you can make a sandwich without a recipe, then you can cook without a recipe. Its just deciding what parts you want to add and which you don't.